POET’s enduring vision to create a world in sync with nature began over 30 years ago. As the world’s largest producer of bioethanol and a leader in other bioproducts, we strive to revitalize global agriculture and provide practical, plant-based alternatives to decrease our dependence on fossil fuels.

Sustainability has always been at the heart of our business and is the core to our success.

It’s a commitment that is brought to life by the suite of Earth-friendly products we’ve created, the dedication of our team members, and the economic viability and wellbeing of the communities we call home.

We are investing in the latest biotechnology to promote efficiency and produce even cleaner renewable energy.

As POET looks toward what is next — and at what type of world we want to leave our children and grandchildren — we realize that there is always room to think bigger. We intend to go all in, charting a path toward carbon neutrality while bringing value to rural America, engaging team members, and strengthening our internal commitment to sustainability.

POET has set six goals to help guide us toward a more sustainable future for everyone.

The goals have been separated into two pillars — one that is focused on investing in technology and improving our overall operations, and one focused on advocating for a sustainable society.

1. Reduce the carbon intensity of bioethanol by 70% compared to traditional gasoline by 2030.

2. Continue to invest in technology to advance the development of low-carbon bioproducts that can displace more fossil-based fuel products.

Advocate for a sustainable society

4. Continue to drive policy that supports biofuels and bioproducts.

6. Create programs and opportunities that allow our team members to give back to causes that align with our mission.

It is important to note that many of the carbon reduction pathways POET is considering will require state and federal policy support and significant capital investments.

The below graphic illustrates many of the carbon intensity (CI) reduction strategies that POET will consider in order to achieve our carbon neutrality goals. In order to maximize efficiencies, each facility will select the technologies that are best suited to their location.

POET’s ability to continually improve our processes and implement carbon reduction technologies across our network is contingent on state and federal policy. The bioproducts industry will require support from policymakers to create incentives that will drive lasting change.

The word “sustainability” has certainly gained popularity in recent years, but at POET, it is not a new concept. It has been a part of our DNA since the company’s earliest days. For more than three decades we have been a powerhouse in driving the development of biofuels and bioproducts, always maintaining our tradition of innovation and environmental stewardship along the way.

We are proud of our agricultural roots, and we strive to keep the spirit of the family farm at the heart of everything we do. POET was founded on the concept of value-added agriculture, or finding ways to leverage the land productively and with integrity. When CEO Jeff Broin’s father, Lowell, saw his Minnesota cropland lying idle in the 1980s – and being paid by the government to keep it that way – he knew there had to be a better way to put his crops to good use. With a little creativity and common sense, he got to work.

Since 2005, POET has reduced its
annual energy use by

Since 2005, POET increased its
per bushel biofuel yield by

Since 2007, POET has reduced its
annual water use per gallon by

At POET we recognize the urgency of the climate crisis. In addition to producing several plant-based bioproducts that displace petrochemicals, we are constantly finding new opportunities to lower our overall energy use and reuse energy more efficiently in our operations. As part of those efforts, we have developed a number of sustainable technologies that are already in use.

POET’s bioprocessing facility in Chancellor, SD is a prime example of waste to energy technology. The facility is powered using steam generated from biomass combustion and methane gas that is pipelined from the landfill near Sioux Falls, SD, which would otherwise be released into the atmosphere.

In addition, nearly half of POET’s bioprocessing facilities now utilize energy-efficient, steam-powered turbines that generate electrical energy from process steam to operate the plant. Each generator produces an average of three megawatts of electricity per facility, totaling 50 megawatts per year — enough to power 2,000 homes, or a combined total of about 40,000 across the entire POET network.

Our energy-efficient production process allows carbon dioxide to be captured for commercial use. In fact, POET is the fastest-growing renewable CO2 business in the US, and more renewable CO2 means that less CO2 is harmfully extracted from below the ground.

POET has also signed a Letter of Intent with Navigator CO2 Ventures to participate in the Heartland Greenway carbon capture, utilization, and storage (CCUS) system. The project will phase in 18 of POET’s facilities across Iowa, Nebraska, and South Dakota to capture approximately five million metric tons of CO2 annually. Heartland Greenway is on schedule for operational in-service in 2025.

POET’s patented Total Water Recovery system filters, treats, and recycles water used in the production process. This system essentially eliminates liquid discharge from POET’s network of bioprocessing facilities, except for steam and water present in bioproducts that exit the facility.

As of mid-2021, the majority of POET’s headquarters in Sioux Falls, SD is powered by the first POET solar farm. The 400 kW solar farm is the largest of its kind in the city and, in the summer months, will generate more power than what is needed for our office building. The additional power produced will go back to the grid to power local homes and buildings. 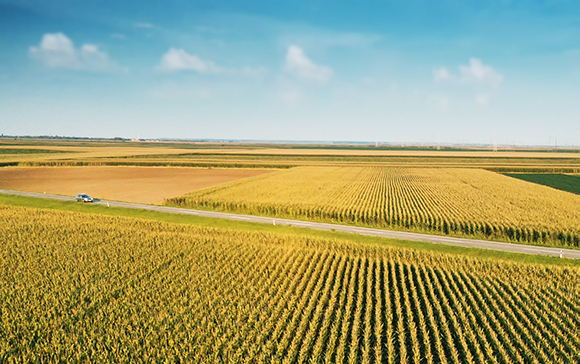 As we have grown, we have increasingly recognized our capacity to improve upon our processes and become even more ambitious in our actions, both inside and outside our walls. In addition to our large-scale improvements, we have implemented internal efforts to conserve waste, including recycling, paper conservation, reusable dishes and tableware, and the transition to LED light bulbs. We have also encouraged local community conservation efforts across our locations.

Most importantly is that, at our core, we strive to be highly ethical and moral — to simply do the right thing. The POET team holds ourselves to a high standard of treating others with respect and dignity, which we believe serves our ultimate goal of leaving the world a better place than we found it.