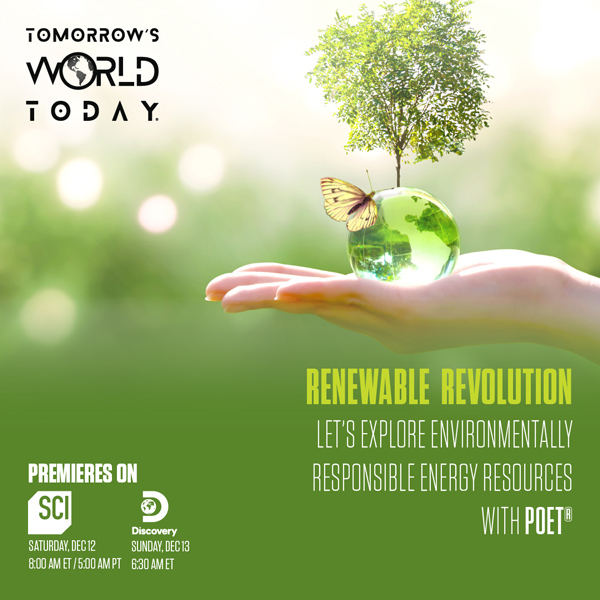 SIOUX FALLS, SD (December 8, 2020) –POET, the world’s largest producer of biofuels, will be featured on an episode of Tomorrow’s World Today on Saturday, December 12 at 8:30 am ET/PT on Science Channel and Sunday, December 13 at 6:30 am on Discovery.

In the newest episode of Tomorrow’s World Today, field reporter Darieth Chisolm heads to Scotland, South Dakota where she learns about POET and their mission to fight climate change through agriculture.

Biofuels like ethanol are made from plants – like corn – and are a clean-burning, renewable alternative to fossil fuels. Ethanol reduces tailpipe emissions by 42% as compared to traditional gasoline and replaces harmful petroleum-based fuel additives that pose serious health risks by worsening air pollution.

“Many people don't realize that agriculture and biofuels can be a major near-term solution to some of the world’s most pressing issues. Biofuels like ethanol are clean, affordable and, most importantly, they are readily available so that all consumers can make a more environmentally conscious fuel choice today. The biofuels industry also supports farmers and rural communities across the country by providing domestic markets for ever-increasing yields of grain. Put simply, biofuels are the key to successful agriculture, and successful agriculture has the potential to be an even bigger carbon sink and a critical component in the fight against climate change,” said Jeff Broin, Founder and CEO of POET.

In addition, the co-products that result from the ethanol production process are used in many other plant-based consumer products, from hand sanitizer to asphalt rejuvenator to renewable carbon dioxide. POET’s research and development teams are constantly focused on innovating even more renewable, Earth-friendly alternatives to petroleum products.

“We’re exploring everything we can to displace petroleum,” said Jeff Lautt, President & Chief Operating Officer for POET. “Whether that’s hand sanitizer you use on your body or the fuel you put in your vehicle, we’re better for you and we’re better for the environment, and we work as well as – or better than – any petrochemical out there.”

After visiting POET’s headquarters, Darieth heads to POET’s largest biorefinery in Chancellor, SD which produces 120 million gallons of ethanol every year while being powered by renewable energy sources, allowing the biorefinery to supply low carbon fuel across the country.

About Tomorrow’s World Today
Season three of this family-friendly, cutting-edge television show travels the world in search of innovative pioneers who are creating new ways to utilize our natural and technological resources for a more sustainable lifestyle. Tomorrow’s World Today has a home base in Pittsburgh, PA, one of the nation’s most progressive tech landscapes, home to Duolingo, the most downloaded educational app in the world, and UBER’s flagship location for autonomous transportation.

About POET
POET, headquartered in Sioux Falls, SD, is the world’s largest biofuels producer. POET is a leader in biorefining through its efficient, vertically integrated approach to production. Started in 1987, the company today has a network of 28 production facilities across 7 states. At full run rates, POET purchases 5% of US corn and produces over 2 billion gallons of ethanol, 10 billion pounds of distillers dried grains, and 600 million pounds of corn oil annually. In 2019, Fast Company recognized POET on its annual list of “Most Innovative Companies” for transportation and FORTUNE recognized POET on its list of companies that are changing the world. For more information, visit poet.com.