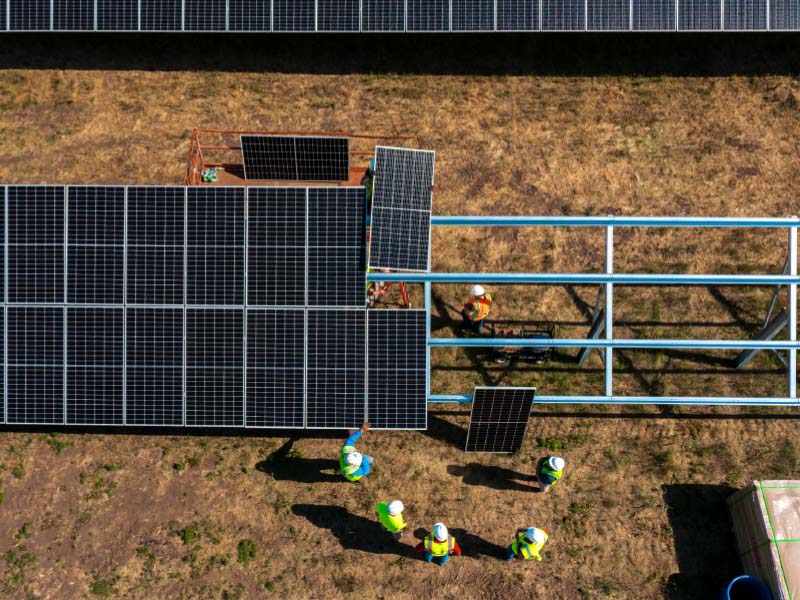 Sioux Falls, SD (October 13, 2021) – Today POET, the world’s largest producer of biofuel, announced the completion of its first POET Solar Farm, which will help power the company’s corporate headquarters in Sioux Falls and showcase its ability to construct similar projects for others.

The solar farm’s completion comes in the wake of POET’s release of its inaugural sustainability report, in which the company pledged to transition its bioprocessing facilities to carbon neutrality by 2050.

“At POET, we’re working every day to chart a path toward carbon neutrality while growing our portfolio of plant-based bioproducts and renewable energy solutions,” said Jeff Broin, POET Founder and CEO. “We’re very excited about the first POET Solar Farm, which exemplifies our commitment to achieving our sustainability goals and cultivating a brighter future through the power of natural resources.”

The solar farm includes six rows of solar panels located adjacent to POET’s campus in northeast Sioux Falls. It is the largest on-site solar project in the city, generating renewable power equal to the annual electricity use of 90 homes and offsetting 630,000 pounds of carbon emissions each year.

The solar energy produced will not only make POET’s headquarters more sustainable, but the community of Sioux Falls as well; any excess solar power generated at POET will be utilized by the local grid to supply homes and buildings with renewable power.

The project provides a unique demonstration for businesses in the region considering solar energy. “Office buildings like POET’s do well with solar energy because they are typically only used during the daytime,” said Rod Pierson, General Manager and Vice President of POET Design and Construction. “Because the electrical load of the building is highest during the day, solar energy is a good fit as a clean, renewable power source. We can work with larger commercial businesses to explore solar options to reduce their carbon intensity and offset energy costs.”

“By generating electricity from the sun to produce low-carbon bioethanol for consumers, we are truly working in sync with nature to provide the renewable energy solutions our world needs,” said Broin.

Media kit can be found here.